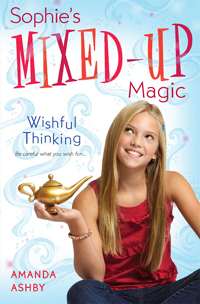 Amanda Ashby was born in Australia and after spending the last sixteen years dividing her time between England and New Zealand, she’s finally moved back and now lives on the Sunshine Coast. When she’s not moving country, she likes to write books (okay, she also likes to eat chocolate, watch television and sit around doing not much, but let’s just keep that amongst ourselves, shall we?)

She has a degree in English and Journalism from the University of Queensland and is married with two children. Her debut book, You Had Me at Halo was nominated for a Romantic Times Reviewer’s Choice award, and her first young adult book Zombie Queen of Newbury High was listed by the New York Public Library’s Stuff for the Teen Age 2010. Her latest release, Fairy Bad Day, has been selected by Voya as one of their Top Shelf Fiction for Middle School Readers 2012 and is a SCBWI Crystal Kite Award finalist for the Australia/NZ region. To find out more, please go to www.amandaashby.com.

Be careful what you wish for…

After eleven year old Sophie accidentally gets herself turned into a djinn, she starts to think that it might not be so bad after all. (Of course, that’s after she gets the whole orange skin problem sorted out.) Who wouldn’t enjoy having the power to grant wishes! But when Sophie develops RWD (Random Wish Disorder) and can’t STOP granting wishes, things get more than a little mixed-up! 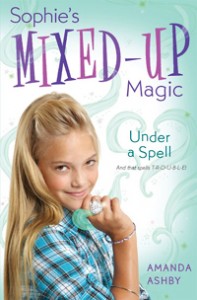 Book Two: Under a Spell (May 31st Puffin)

As Sophie gets used to her magic, her relationship with the adorable Jonathan Tait is blossoming. There’s only one problem: Jonathan’s twin sister, Melissa. She’s a total mean girl who seems intent on making Sophie’s life miserable. On top of that, Melissa somehow seems to sense that Sophie has powers–and manages to bind Sophie to her in a totally self-serving way. Can Sophie figure out a way out of this–without ruining her chances with Jonathan?

Amanda: I love gizmos but my natural laziness always stops me from doing any. I think I need to start bribing my kids to start helping me out!

Jenn: How does this book fit in with your others?

Amanda: This is my first series and my first attempt at writing middle grade fiction as well, so it has been a bit of a departure. I think that the tone is similar to my other stories though the plot is probably a bit more restrained (middle grade books were a lot more difficult than I first imagined!) 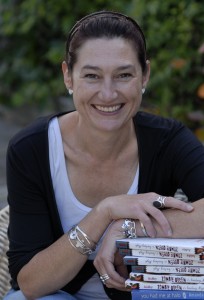 Amanda: I’ve had a minor obsession about writing a book where a character turns blue, however I had forgotten about it until I was in a doctor’s surgery and saw an article in a magazine about a guy who really did turn blue. It totally reminded me of my obsession and so I went home and made sure that Sophie turned a different color when she became a djinn (though I made her orange!!!)

Amanda: I sobbed through most of The Fault in Ours Stars by John Green and I was full of envy as I read The Girl of Fire and Thorns by Rae Carson.

Amanda: The third Sophie book comes out in October and next summer I have a new young adult book called Demonosity coming out. It’s got alchemy and two beautiful medieval demon knights in it. One is good and one is bad and I’m kinda in love with them both!!
Collapse